Sloane Stephens is an American tennis player who was born on March 20, 1993 in a plantation in Florida. Her father John played for the New England Patriots, and her mother Sybil (Smith) was the first woman to be selected to the first team of the National Swimming Team in the first quarter of history. When Stephens was a baby, her mother left her father and she was raised by stepfather Sheldon Farrell. When Stephens was two years old, the family moved to Fresno, California, and she started playing tennis at the age of nine. By 11 o’clock, Stephens and her family moved to Boca Raton, Florida, to receive more formal training at the Chris Evert Tennis Academy.

Stephens started her junior career at the ITF (International Tennis Federation) Junior Tour in 2006, and started her career at the ITF Women’s Tour in 2007. For more than four years, her performance on the Youth Tour has made Stephens ranked fifth in the youth world rankings. In 2008, she won her first championship in a doubles match with Christina McHale in Wichita, Kansas, earning $10,000. After playing with the New York Bath team in the World Tennis Team in 2009, Stephens became a professional player at the age of 16. By 2010, she was ranked 198th in the WTA 200. Stephens ranked 128th in 2011. In August, Stephens won her first Grand Slam match against Reka Luca Young and was named the youngest player in the top 100. In the name.

In 2012, Stephens participated in the Australian Open, Miami Open, Confederations Cup, Italian Open, Strasbourg International Open, French Open, Wimbledon Open, Citi Open and Cincinnati Open. Ranked 38th, she is the youngest player among the top 50 WTA players after these games. She ranked second in the United States with 11th place. A wrist injury in 2014 forced Stephens to end her season early, and she fell to 37th in the WTA rankings. After returning in 2015, she finished the season in 30th place.

Stephens suffered a foot injury during the 2016 game. After being diagnosed with a stress fracture, he was forced to undergo surgery in January 2017. Stephens returned to the court in April and her season was damaged by the loss. However, in August, she defeated Madison Keys and won her first Grand Slam championship. She was ranked 13th at the beginning of the season and 6th at the end of the season. After Wimbledon’s performance in 2018, she ranked third in her career. Throughout the 2019 and 2020 seasons, Stephens struggled and her ranking dropped sharply, but she continued to train and compete.

Stephens founded the Sloan Stephens Foundation in 2013, which provides training, builds tennis courts in impoverished communities, and organizes after-school tennis courses. She was sponsored by clothing retailers Nike and Under Armour, car manufacturer Mercedes-Benz, and participated in Colgate’s bright smile event. In addition, she also collaborated with Soles4Souls, a charity organization that collects old and new sneakers for poor children. In 2017, Stephens received a bachelor’s degree in communications from Indiana University. In 2019, she announced her engagement with American football player Jozy Altidore. In 2021, she launched a swimwear series in collaboration with Solid & Striped. 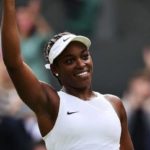